The in tray Prime Minister…you’ll need a stiff drink

So we have a new government…well sort of if you don’t look too closely.  Perhaps a better way to describe what has just happened is new emphasis by the same people.  Cynical? Only slightly I suspect.  So what do the new ministers have to deal with?  Here are some of the known knowns:

Brexit – Before exploring this just a little bit I would just like to suggest that if the remain side had won I suspect that the leave side would not have been so magnanimous.  I am sure that Remain would not have meant Remain for them.  However, they won so now they have to make the lunacy at the heart of Leave work.  The most interesting  thing about the new Minister’s for Brexit Johnson, Davies, Fox and Leadsom is that not one of them has the first clue how this thing will work.  It is one thing to make fanciful claims but it is quite another to face full square the problems associated with this.   Perhaps the best example will be how Andrea Leadsom will deal with the angry farmers when they realise that they won’t have the cushion of the Common Agriculture Policy but rather have to face the full force of international competition.   I lost count of the number of Leave placards I saw whilst driving through the countryside – well now they are going to understand the real meaning of Leave – and sooner than many will like – 2019 isn’t that long away and it is the most likely year that we leave the EU.   If they think that the government will have the money to subsidise them as the EU has then they are in for a sock.

Brext means Brexit is a very simple slogan but there will be an awful lot of change forced down the throats of many people to make Brexit work and it is very easy for Iain Duncan Smith to smugly say in 10 years time we’ll all look back on this and welcome what we have done.   Let us all hope that is the case but to get from here to there is going to be painful for an awful lot of people, many of whom were sold a dud by the Leave side and they may be some of the people most badly affected by this journey.  I hope I am wrong;

Debt – I am no economist or expert, two things we are now supposed to think they don’t know what they are talking about, but as a country we have an awful lot of debt.   I am not talking about the Government debt, which is bad enough, but rather the debt we all owe.  As a country we don’t produce enough to support our lifestyle so we borrow money to make up the difference – this known as the Current Account Deficit .  Now provided this is sensibly done then it isn’t a problem but when it is not then we really do have a serious problem, especially if the people who lend us the money feel they that we may not pay it back.  How big this problem is is unclear at the moment – however, along with the Government debt it is reasonable to assume that any Government will want to ensure that they keep as tight a lid on things – suddenly that £350 million is going to disappear very quickly;

Climate Change – Despite the name disappearing from the Government department it is still out there and it is only going to get worse.  It will cause untold damage to the way we do things and we have to take steps to prepare for this.  Pretending it doesn’t exist doesn’t make the problem go away;

Energy Policy – For the first time Britain is starting to generate electricity from non coal fired power stations on a regular basis.  We are decarbonising our energy production, well sort of if you don’t count the gas powered power stations.   Many years ago I was taught that what the electricity system requires is something that can produce the base load needed to keep the lights on.  Back then that was provide by Coal and Nuclear, both of which are now starting to be fazed out.  The new electricity system still requires something to produce the base load, which can be provided by renewables but there needs to be a backup supply when the wind doesn’t blow or it is dark or both.  There are a number of ways to reduce this need which, interestingly, is small scale and labour intensive ie insulation, more solar panels on homes, local smart grids and local combined heat and power (OK this isn’t that small a scale but still not on the same scale as building a nuclear power station).  We as a country we have not really addressed any of the long term supply issues around the base load/backup issue.  The last attempt was the plan to build a Chinese/French reactor in Somerset which the last Chancellor couldn’t see any problems with and was happy to throw money at the huge gaping hole at the heart of the project.  This will not do anymore and after all Climate Change is real and we have to come up with an energy policy that makes sense;

Problems associated with the disintegration of the post colonial setup – This is management talk for Migrants and Terrorism.  As the latest tragic events in France have shown they haven’t gone away.  Many of the migrants are fleeing conflicts in countries that were created by the Colonial powers of the day.  I am not going get into the tit for tat argument about whether this or that is true and then beat myself up for living in one of those ex colonial powers.  That is pointless.  What we do have to face is the consequences of those decisions either in the Middle East, or Africa and they will be bloody and tragic in equal measure.  In fact if you want to look for the most likely source of unknown unknowns this is it;

Zombie Parliament – I know it might not seem that way at the moment but this Parliament is now unfit for purpose.  I am not discussing the broader issue of fairer representation but rather the the 2015/2020 Parliament.  The government only has a slender majority and they cannot rely on the disarray on the Labour side to help them too much.  Things I suspect will start to come to a head when the Berxiteers who are not in Government suddenly have to start voting on what Brexit actually means and they don’t like it.  Very quickly the whole Brexit adventure could collapse and we would be stuck with a parliament that won’t vote the government’s business through whilst at the same time refusing to play ball with the Fixed Terms Parliament act (see previous blog).  If this seems unlikely just look at the grime faces the surrounded Andrea Leadsom when she withdrew from the Conservative leadership contest – there was more than 12 MPs which is all it takes to threaten any legislation that comes to the House of Commons. 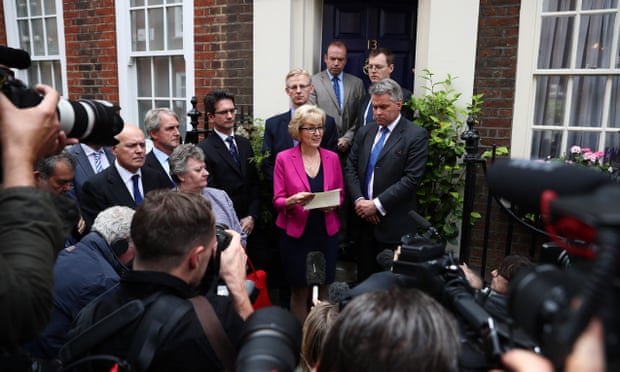 If this were to happen then god help us all because I haven’t got the first clue how the government would get out of that mess.

So let me wish the new Prime Minister all the best.  For once in a generation or more we are facing a situation that if she makes a pig’s breakfast of things then it really really matters.  It could be argued that Gordon Brown faced a similar situation in 2008/9 and we got through it but therein lies part of the problem.  By getting through that we only stored up trouble for ourselves and this time we really don’t have any happy endings if we cock things up.  No pressure then.

An artist, historian and middle aged man who'se aim in life is to try and enjoy as much of it as he can
View all posts by Guthlac →
This entry was posted in Brexit, Politics and tagged Andrea Leadsom, Boris Johnson, Brexit, climate change, Debt, Fixed Term Parliament Act, Nuclear Power, Refugee Crises, Terrorist, Theresa May. Bookmark the permalink.