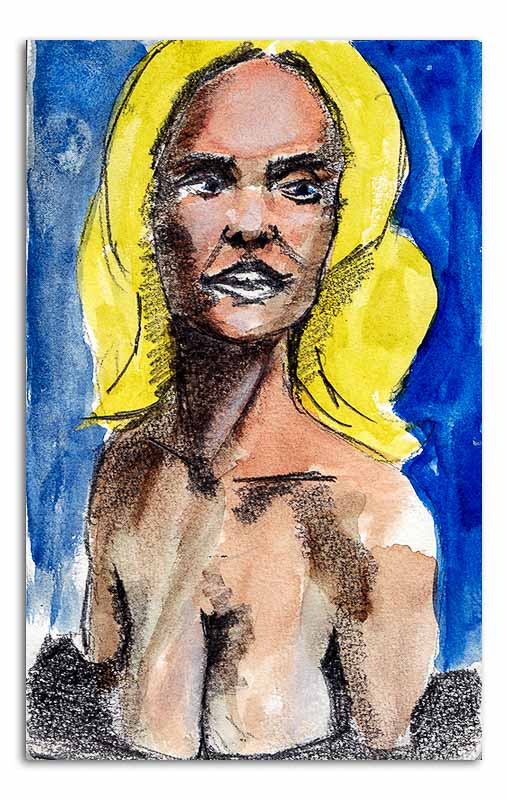 This morning I was introduced to a wonderful phrase ‘…right click synonyms…’ which is probably most prevalent amongst students with an essay to finish and a lack of language skills – their salvation is just a right click away.  This usually creates an essay that is vocabulary rich but lacking any sense of intelligence behind it.   To be far to students we have all done this from time to time with the same daft results.

This then got my wandering along its weird byways and so the characters Porsche and Write Click-Synonym were created.  Porsche works in some I Saw You Coming shop in Chelsea or Notting Hill as an assistant or clientele dispenser.  She doesn’t always remember to collect her wages  at the end of the week because she has to dash to some ‘do’.

Write has just barely qualified as an ‘opacity designer’ and now works at a boutique design house somewhere in Soho where he runs errands and generally gets in the way.  The owner can’t really fire him as Write’s father and his father ride out together with the Crotchy hunt when they’re not wasting billions of other people’s money in the City.

I really need to get out more.

An artist, historian and middle aged man who'se aim in life is to try and enjoy as much of it as he can
View all posts by Guthlac →
This entry was posted in Art and tagged Click-Synonym, drawing, essay, sketch, sketchbook, student, Synonym, watercolour, woman. Bookmark the permalink.