So we are approaching decision day – will the Leicester Lockdown Continue?  If it does will the outer suburbs of Leicester which, whilst not within the boundaries of the city, are still part the lockdown be included or should they be released from the restrictions?   As I have mentioned before I monitor this lockdown closely, for obvious reasons, using the only publicly  available dataset – the Coronavirus (COVID-19) in the UK dataset published every day around 4pm in the afternoon.  This dataset is only accurate to the local district council level and whilst there are clearly more detailed datasets in existence these have not been made public.

The first problem I  have tried to overcome is to provide some context for the data.   The main data set is the number of people that are  lab confirmed infected with Covid 19.  I have looked at the rate for Leicester (obviously), Oadby and Wigston (fully in the lockdown area), Blaby (partially within the lockdown area), North West Leicestershire (a local district in Leicestershire with reasonably sized urban areas and yet not  close to the city of Leicester) and finally the Rest of the East Midlands (This is the infection rates minus the above – the City of Leicester is geographically located in the East Midlands.).  (Note: Charnwood Council, was partially included in the restricted zone,  was not included because of the complicated spread of the population within the council area would have made data meaningless.) All the data was then presented as a rate per 100k of the population to try and give very disparate sized datasets some commonality.

It is clear that the number of new cases recorded in the City of Leicester has significantly reduced from 18.66/100k on the 1st July 2020 to 3.16 on the 13th July 2020 (It takes a couple of days for the numbers to settled down hence I have chosen the 13th). However, when this is compared to the Rest of the East Midland line it is clear that this is still much higher than the rest of the East Midland number.  Nonetheless it does represent a four fold reduction in new case in less than 14 days which it has to be said is impressive.

Individual new case per day is an important indicator.  However, those people stay infectious for a number of days.  It is far from clear as to how long this might be or how long the individual might have been infected before being tested.  What is clear is that there is a cohort of people at any day who we know are infectious and so I have decided to use the quarantine guidance i.e you must isolate for 14 days to give an idea as to the size of the cohort of infectious people.  To do this the previous 13 days number of recorded infected people have been added to current day’s infected to provide a number.   This is somewhat crude but without any greater understanding of how the infectious spreads it is the best I can do.   So the first graph shows that the City of Leicester has reduced the size of the cohort from 267.87/100k population to 168.82 – a reduction of just over one third.  However, when compared to the rest of the East Midlands performance over the same time it can be seen that there is a significant way to go.  The graph below illustrates this very well:  Whereas Blaby District Council is for all intents and purpose the same as the Rest of the East Midlands Leicester is still 11.7 times larger. 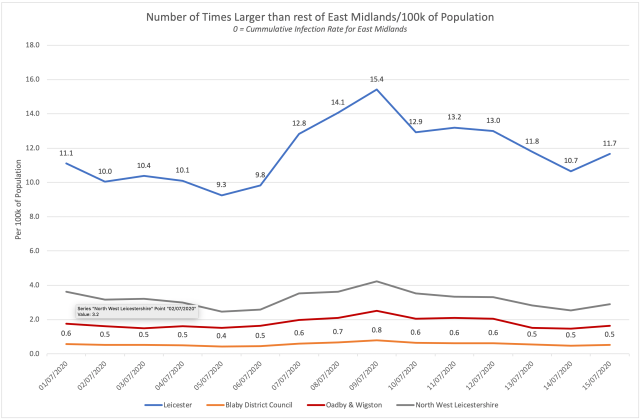 So what do these data picture tell us?   Firstly, Leicester has reduced the number of new infections by a significant number.  The trend is clearly down.  However, when compared to the trend in the Rest of the East Midlands it still has some way to go.  Equally, Oadby and Wigston is doing much better but is higher than the Rest of the East Midlands.  Blaby District Council has seen the most improvement and is really no different to the Rest of the East Midlands and certainly better than North West Leicestershire, which is outside of the lockdown.  From these figures it would seem to indicate to me it might still be too early to drop the restrictions on the City of Leicester and Oadby/Wigston but Blaby should no longer be subject to the restrictions at all.  If it were me I would extend the restriction on Leicester & Oadby/Wigston for one more week to ensure that the reductions are real but Blaby should be released.   This is what Leicestershire County Council leader Nick Rushton is saying, and the County Council were responsible for the extend restriction area outside of the City of Leicester.  Whether London will listen is another matter.

An artist, historian and middle aged man who'se aim in life is to try and enjoy as much of it as he can
View all posts by Guthlac →
This entry was posted in Corvid 19 and tagged Blaby District Council, City of Leicester, Covid, East Midlands, Lockdown, North West Leicestershire District Council, Oadby and Wigston Borough Council, virus infection. Bookmark the permalink.