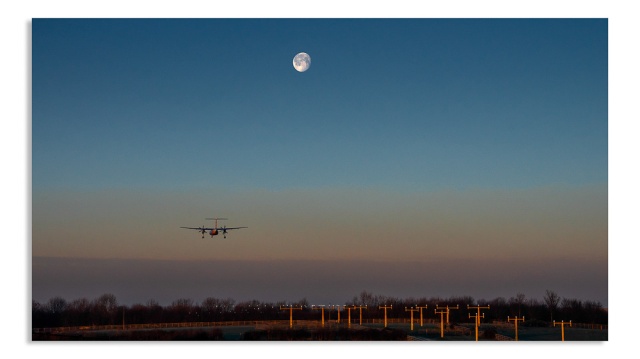 As dawn broke this morning I found myself standing on top of a hill underneath the final approach to East Midlands Airport. It was a cold morning, not a middle of a Russian winter cold but cold enough for me.   As a plane came into land I turned towards the airport and captured the shot above.   Only I didn’t.   This image has been altered by using the content aware  function on Photoshop (the moon was lowered in the sky to make a more pleasing composition).  Now this would immediately invalidate this image in the eyes of many  photographers and I certainly wouldn’t be able to submit it to any number of photographic competitions (if I ever entered any).

Of course I understand such objections but it doesn’t seem to square with almost two centuries of fiddling and changing images.  Before Photoshop there was the airbrush and before this the early photographers and their printers spent many hours in the darkroom changing the original image to meet what the photographer wanted.   Is this a deception?   Well I don’t believe it is any more than cropping an image is.   The only time it becomes a deception is when you don’t acknowledge what you have done.   As for whether such images should be accepted into photographic competitions that is very much down to the people that set the rules. 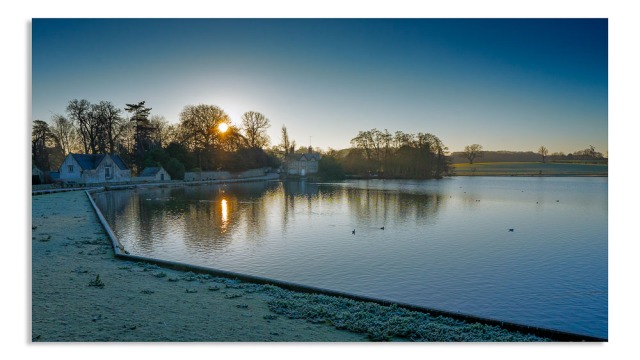 Away from the problems of content aware I visited Melbourne Pool, a location I haven’t visited in years.   The pool has a special part in my family’s lore as it was here that a distant relative saw the ghost of the pool.   However, by all accounts he was a notorious drunk so you pays your money and you take your pick!

Back to the freezing hill above Kegworth.   The reason for my visit was that I wanted to capture the increasingly rare sight of Ratcliffe on Soar power station running at full power.   Nowadays the monster sits forlornly next to the River Soar/River Trent confluence awaiting the call.  It rarely comes.   It is the last of its kind in this part of the Trent.  In the past there were megawatt monster generating electricity virtually every  10 miles along a river that runs through some of the most productive coalfields in Britain.   Whilst much of the coal is still there underground the demand has vanished to the newer cleaner renewable energy sources (just behind where this image was taken is a solar farm!).  However, when the sun doesn’t shine and the temperature drops the old monster comes back to life and presents a wonderful photo opportunity.   However, its days are numbered and probably within the next 10 years it too will be gone and so the last remnant of the once great coal industry in the East Midlands will be no more.

An artist, historian and middle aged man who'se aim in life is to try and enjoy as much of it as he can
View all posts by Guthlac →
This entry was posted in Photography, Winter and tagged Adobe Photoshop, Coal, Content Aware, East Midlands Airport, Melbourne, Ratcliffe on Soar power station, River Trent. Bookmark the permalink.